Note:  I wrote this a week ago, but the translation has not been forthcoming.  I’ll try to get it updated soon, but wanted to post this while it’s still a timely news story.

Some people have been rather quick to criticize the appointment of Frank Zumbruch as the Commissioner for Culture and Creative Industries in Heidelberg.

While some have made valid points (or at least strong arguments) I can’t help but ask the question, what result are they hoping to achieve? 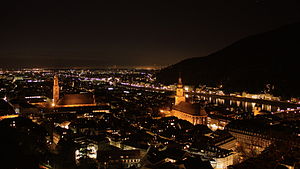 I for one am grateful that the city has recognized the need to cultivate creative workers for a creative economy, and I see this as a step in the right direction. Regardless of how fair or unfair it was of Dr. Würzner to just GIVE him the position without the knowledge or permission of the Gemeinderat, I don’t think anyone can disagree that it’s a sign of forward thinking that such a position even exists.

Most people I talk to seem to say the same thing: agree or disagree with his policies, Oberburgermeister Würzner GETS THINGS DONE. The last thing we need is a slow, bureaucratic government holding us back. That this announcement came as a surprise to many is not proof that this was a quick decision, but even if it were, sometimes quick decisions are necessary. Additionally, the accusations of nepotism or favoritism seem like just the sort of small-minded political manipulating that we’ve come to expect.

As far as WHO should hold the position, I say, who else?

Aside from Frank Zumbruch, I can think of no other candidate who has been as visible, as vocal, or as well positioned to be appointed to this office as Frank Zumbruch. That’s not to say that no one else is qualified, but at this time, he is, at least in my mind, most capable of establishing Heidelberg and the surrounding area as a 21st century capital of creativity in Germany.

Nobody knows how this will continue. Perhaps this office will continue by appointment, perhaps by election, or perhaps because of the numbers of people who like to find something to complain about, perhaps this office will cease to exist, and Frank Zumbruch will have been the first and the last.  For all I know, I will be next in line to hold this position. But it could just as easily be yours, next time around.

Numerous people seem to hold the position that „Frank Zumbruch is the right man for the job, but how he got it is questionable.“ C’mon people, if he’s right for it, nothing else matters. At the end of the day, what’s important won’t be our bickering, but our commitment to build the framework for the future of Heidelberg as a city where creativity is a commodity.

Just a short reminder:  Tomorrow (the 30th of September) is the first day of the weekly three part creative writing workshop with Cosima.  It starts at 6:00 pm at Action House Heidelberg (Bergheimerstr. 131, 69115 Heidelberg-Bergheim).  Anyone interested is welcome to attend, in exchange for a 5€ donation.

Our newest pages: About Action House Heidelberg, and Umfrage

Action House Heidelberg is collaborative working space for creatively and artistically-minded people (and those who would like to be). We want to support young artists and entrepreneurs as they shape the face of the community. In addition to offering creative space, we offer training courses, workshops, seminars and so on in various creative areas, including fashion design, video production, language training, music, and graphic design, among others. We use art as one of many tools to develop our creativity, which shapes the culture of our city, Heidelberg.